Intel’s Xe GPU featured on 11th Generation Tiger Lake CPUs has once again been benchmarked and this time the chip performs on par with NVIDIA’s fastest MX series discrete graphics that are featured inside most mainstream laptops.

The various benchmark entries come from TUM_APISAK & Rogame (via Videocardz) which show the performance versus NVIDIA & AMD based mobility based graphics chips for mainstream and entry-level laptops.

The specific Xe GPU which has been tested is part of the Core i7-1165G7 configuration. Do consider that the Core i7-1165G7 is not the fastest Tiger Lake CPU configuration as that title belongs to Core i7-1185G7. Regardless, the Xe GPU is based on the Gen 12 GPU architecture which features 96 EUs which make up 768 cores in total. This chip is clocked at 1.3 GHz and the chip shares its power with the entire Tiger Lake SOC which has a base TDP of 15W that is configurable up to 28W. The Xe GPU was tested with LPDD4x memory which operates at 4266 MHz.

The first benchmark comparison is between the Intel Xe GPU with 96 EUs (768 cores) and the NVIDIA GeForce MX350 with 5 SMs (640 cores). The NVIDIA MX350 not only features a higher graphics frequency of 1.47 GHz but also comes equipped with 2 GB of GDDR5 memory which delivers higher bandwidth specifically to the GPU itself. 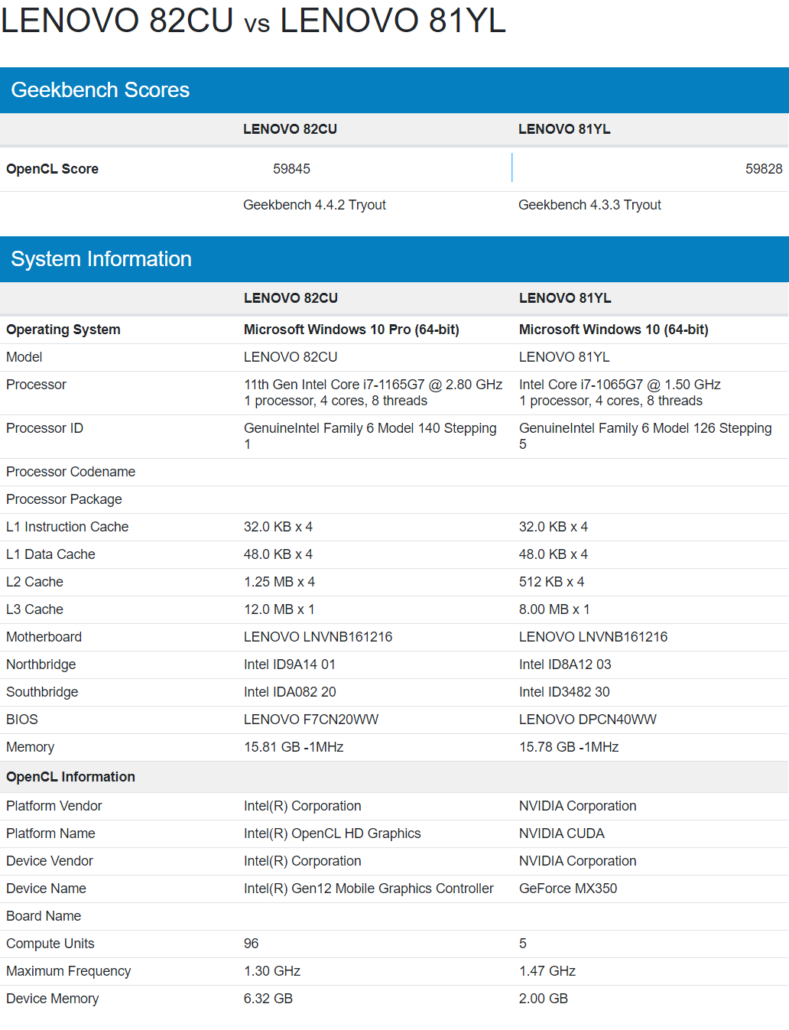 In the Geekbench 4 OpenCL benchmark, the Tiger Lake Xe GPU scores 59845 points while NVIDIA’s GeForce MX350 scores 59828 points. There’s no difference in terms of performance but for Intel’s Xe GPU, this is a huge feat considering it is offering the same performance of a discrete tier GPU while being constrained in terms of bandwidth and power. 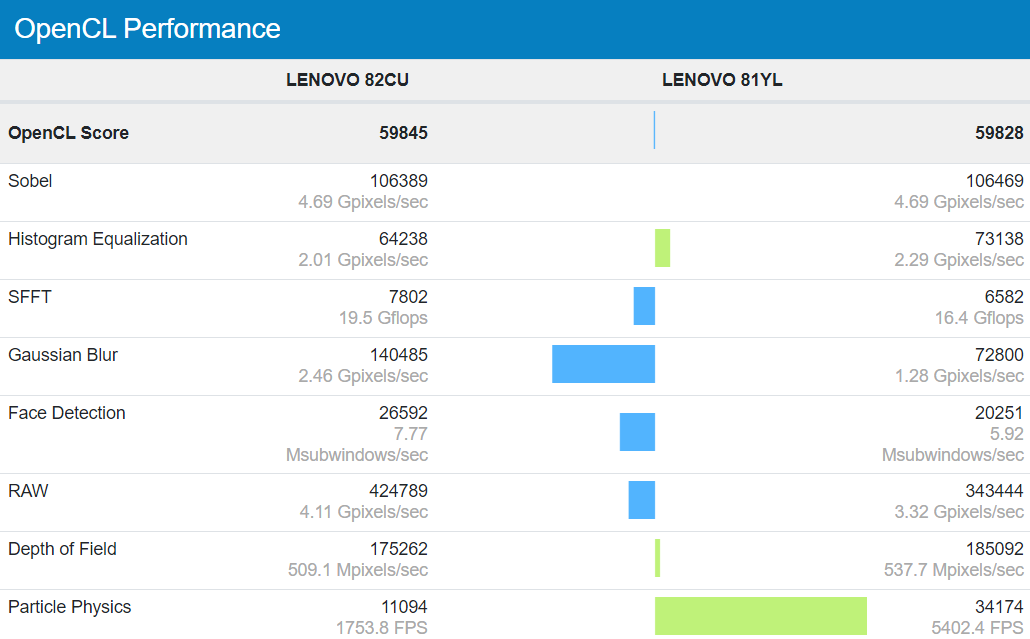 What’s interesting is how each test shows different results between the two GPUs tested. For Intel’s part, they do really well in most of the sub-tests, especially the Gaussian Blue benchmark but NVIDIA manages a huge lead in the Particle Physics test which offsets the overall gains achieved by Intel’s Xe chip.

Also what’s interesting is that a leaked entry of the Apple A12Z Bionic GPU showed up in the Geekbench 5 database a few days ago too and was spotted by Rogame. The Apple GPU which will be embedded within its Macbook line is shown slightly slower than the GeForce MX350. The MX350 scores 13520 while Apple’s A12Z Bionic GPU scores 11315. That’s about a 20% lead for the NVIDIA GPU. The Pascal MX350 configuration used here is the lower-end SKU which operates at 15W and has a clock speed of 936 MHz compared to 1.47 GHz of the 25W variant. The A12Z features 8 CU and 1 GHz clocks. 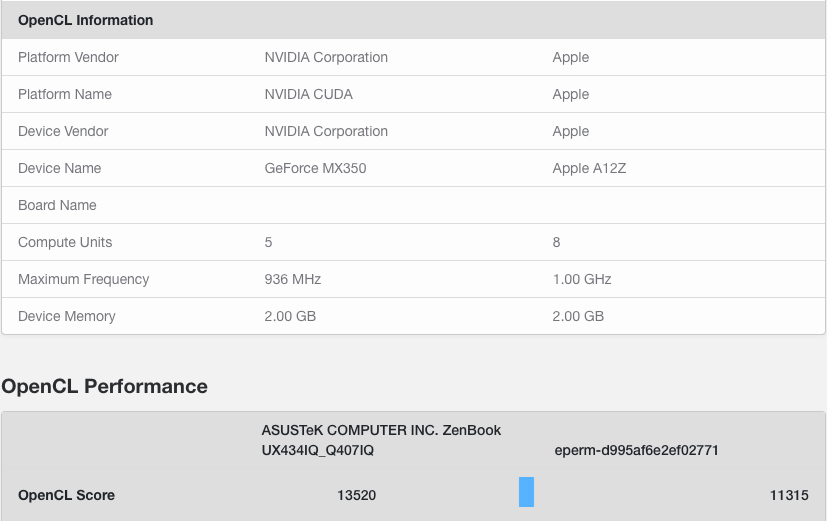 I know GB4 and GB5 are vastly different benchmarks but if Intel’s Xe GPU scale just as well in the GB5 tests as they do against the MX350 in GB4, then Intel will also have a comfortable lead over Apple’s Bionic GPU. 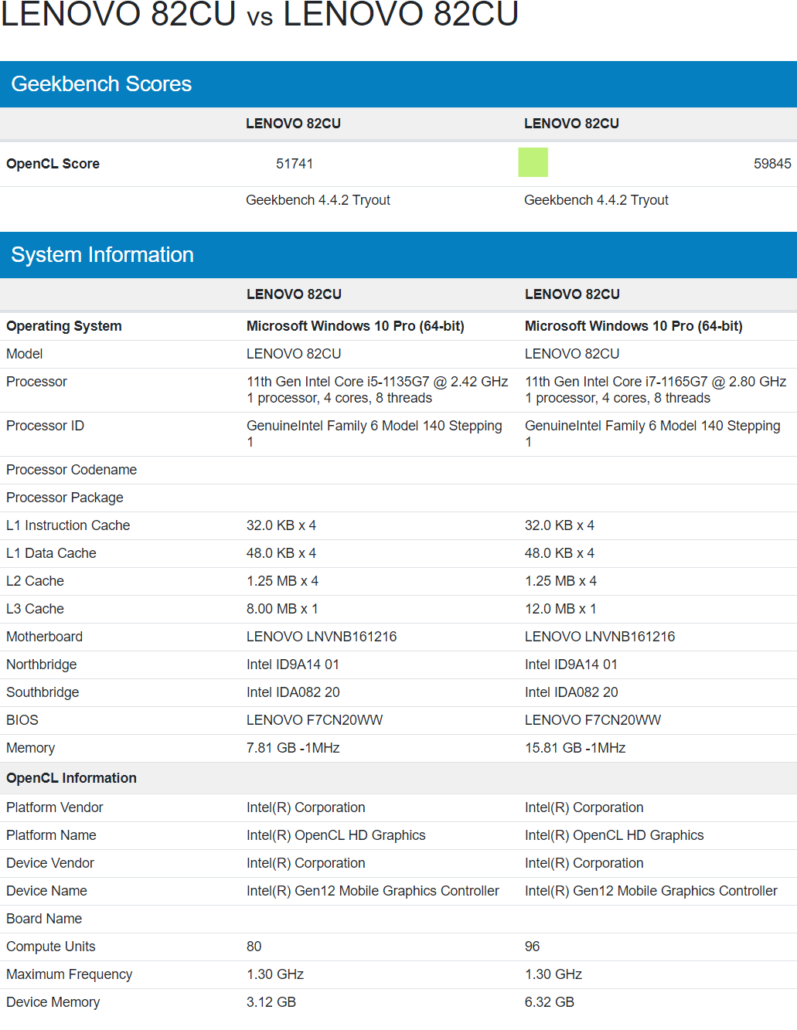 Here we can see the GPU score falls around 13.5% compared to the Core i7-1165G7 which is expected due to the 16.7% lower cores. There’s no sub-test anomaly as was in the case of the MX350 benchmarks since both Xe GPUs share the same Gen 12 GPU architecture whereas the NVIDIA Pascal architecture may perform better in some segments.

Compared to the fastest AMD Ryzen 4000 Renoir U-series SKUs, the Ryzen 7 4800U which features the Vega 8 iGPU (512 cores) at 1.75 GHz, the Tiger Lake Xe GPU with 96 EUs (768 cores) at 1.3 GHz scores just around a 30% lead which is impressive and similar to the gains we have seen in 3DMark leaks previously. The Vega GPU does have 30% lower cores but they also pack 35% GPU frequency advantage over Intel’s iGPU.

The same is true when comparing the Core i5-1135G7 (Xe GPU with 80 EUs or 640 cores at 1.3 GHz) against the AMD Ryzen 5 4600U (Vega 6 with 384 cores at 1.5 GHz). The Intel Tiger Lake CPU scores a lead of about 35% in the same benchmark which is very impressive. Following is a table showing all of the benchmarks and how they stack up against each other.

Intel Tiger Lake processors are expected to arrive in a few months and will feature some new changes to the architecture. First up, they will have the new Willow Cove cores replacing Sunny Cove cores which are currently featured on Ice Lake processors. Along with the new cores, we will get cache redesigns as stated above, new transistor-level optimizations, and enhanced security features. Intel will also be featuring their Xe-LP GPUs on Tiger Lake chips which would deliver a 2x increase in perf over the Gen 11 GPU featured currently on Ice Lake chips.

That and coupled with the Xe GPU architecture, the 10nm+ node should also deliver increased clocks compared to the first iteration of the 10nm+ architecture featured on Ice Lake chips. Intel’s 10nm Tiger Lake CPUs are expected to be featured in a large range of next-generation notebooks and laptops this Summer. Intel has already started its promotional campaign for the new 11th Generation notebook family and you can definitely expect a launch coming in real soon!

The links above are affiliate links. As an Amazon Associate, Wccftech.com may earn from qualifying purchases.